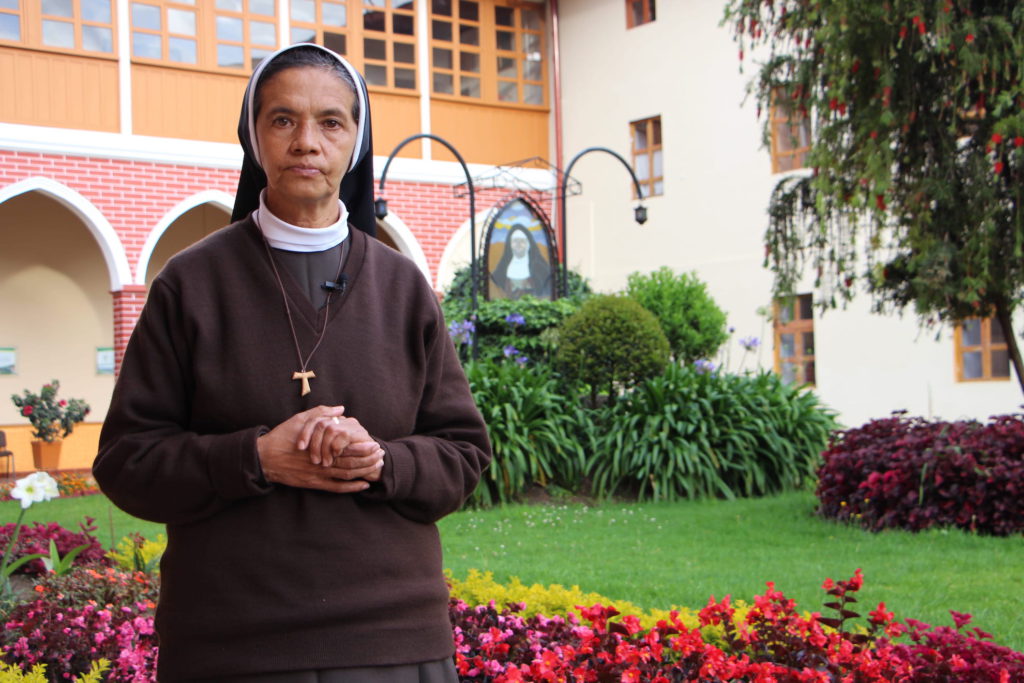 In an interview with the Colombian branch of the Pontifical Foundation Aid to the Church in Need, Sister Gloria Cecilia Narváez, released last October in Mali, spoke about her missionary work, her captivity and her appeal to be a living witness. Here is a summary of her long interview.

Sister Gloria received ACN at the convent in Pasto, Colombia, her birthplace, where she arrived at the end of November to meet her family and complete her recovery. Immediately she told us about her greatest passion: the mission in Africa. “The Franciscan Sisters of Mary Immaculate have been in Mali for more than 25 years. One of our main concerns is the empowerment of women, with special emphasis on literacy, because in that country education is practically non-existent for them.” To this end, local women are taught basic farming techniques and sewing, so that gradually they can boost their independence and become self-sufficient.

The Colombian sister said that health professionals supported them in teaching mothers and fathers what to do in case of pregnancy. This affected men so much “that they even came to us to ask for help so that we could teach them how to do domestic chores and take care of their young children in case the women died.”

In Mali and other African countries, death by childbirth or just a few days after is commonplace. “The parents entrusted us with the care of their babies, which we did with great pleasure, but we got the parents to commit to their children, visit them frequently, and spend time with them,” said the Colombian missionary. Thanks to the nuns’ work, this created a bond of shared responsibility.

Affection without a clock

In Malian culture there is no rush, you do not look at the clock, and the Franciscan Sisters of Mary Immaculate assimilated this perfectly, making themselves available and spending time with and talking to people. They met with them at any time of the day or night, listened to them, tried to help them with their problems, taught them to deal with children’s minor ailments. They even planned evenings, putting on plays, singing and dancing shows, which were also attended by some Muslim village chiefs. In Mali, about 90 per cent of the population is Muslim. Sister Gloria lived in the north of the country. “There were no closed gates, no walls,» said Sister Gloria. Families welcomed them into their homes and shared their food with them. At the end of Ramadan, for example, they were invited to celebrate in their homes and there was always friendliness, she said speaking to ACN. 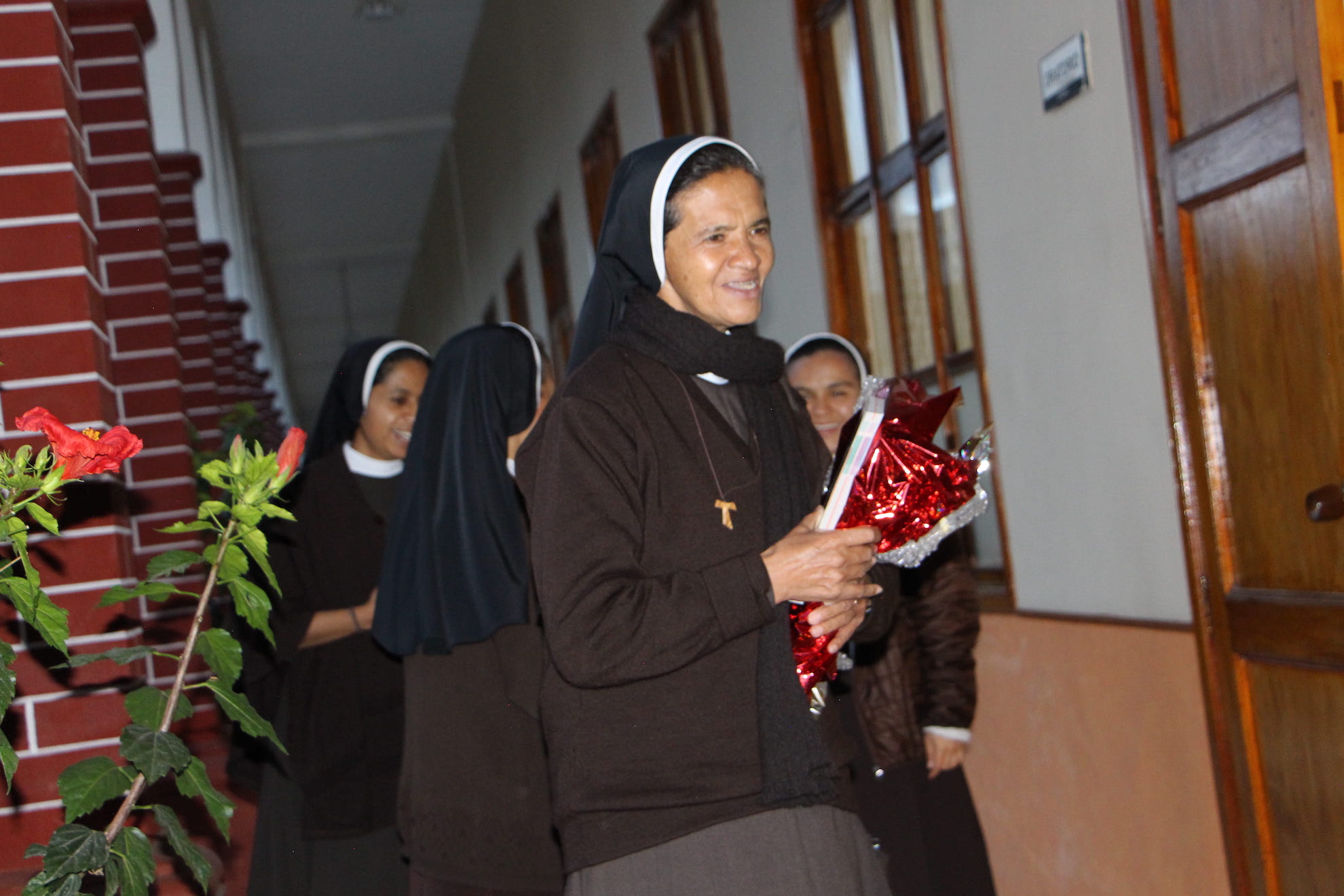 Be quiet so that God may defend you

During her long captivity, in the course of which she was a victim of serious abuse, she had time to reflect on many things, like her religious condition and her work as a missionary, eventually realising that her kidnapping provided a real opportunity. “It was an opportunity God gave me to see my life, my response to Him… a sort of exodus.”

In this exodus, she was accompanied by the example of Saint Francis through the prayer of peace, perfect joy, and blessing to all. Even when she was mistreated, she remembered the saint: “Consider this as a grace.”

Each new day was yet another opportunity to thank God for life, amid so many hardships and dangers. “How can I not praise you, bless you and thank you, my God, because you have filled me with peace in the face of insults and mistreatment.” She appreciated every little thing, however insignificant it seemed, she said during the interview with ACN.

As regards the suffering, she often remembered the teachings of her order’s foundress, the Blessed Caridad Brader, “Be quiet so that God may defend you”, and those of her own mother, Rosa Argoty, “always be serene, Gloria, always be serene”. The family legacy in her is very strong; to quote her mother again, when she was captive, she also said to stay calm: “If someone is a match, don’t be a candle”. She repeated this as a simple tribute to her mother, who died last year.

Even when she was being beaten for no reason or because she was praying, she would say to herself: “My God, it is hard to be chained and to receive blows, but I live this moment as You present it to me… And in spite of everything, I would not want any of these men (her captors) to be harmed.”

Sometimes she felt the need to step away a bit from the camp where she was held to praise the Almighty out loud. When she did, she would recite some of the psalms, as well as some prayers of Saint Francis.

Once, one of the leaders of the group that kept watch over her got upset and took her back hitting and insulting her and God: “Let’s see if that God gets you out of here.” Sister Gloria’s voice breaks when she remembers him: “He spoke to me using very strong, very ugly words… My soul shuddered at what this person was saying, while the other guards laughed out loud at the insults. I approached him and told him in all seriousness: ‘Look boss, please, show more respect to our God; He is the Creator, and it really hurts me a lot that you talk about Him that way’.” Then, the captors stared at each other, as if touched by the force of this simple but forceful statement, and one of them said: “She is right. Don’t talk about her God like that.” And they shut up.

The missionary is sure that on at least five occasions, God or the Blessed Virgin actually intervened to protect her. On one occasion, for example, a large viper circled several times around the place where she slept without approaching her; on another occasion, a very large and stocky guard suddenly stood in the way of another man who was about to slash her veins. 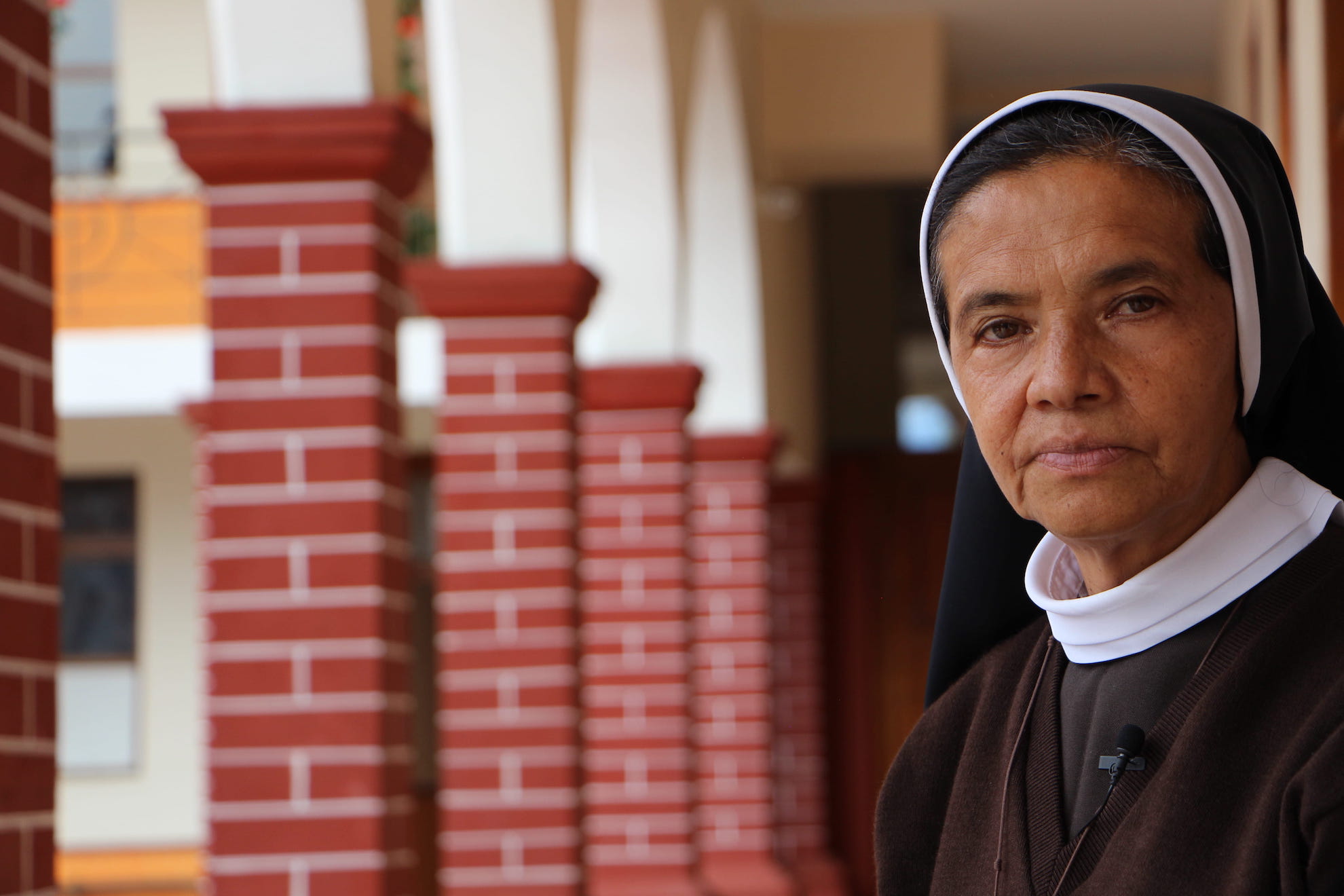 Sister Gloria was held with two other women, a Muslim and a Protestant. In her work as a missionary, Sister Gloria lived tolerance and respect for others, clearly aware that this was essential to perform her work: “If we respect the freedom of others to live their religion, then we can receive that same respect.”

However, she did not receive any respect when she was abducted. But her captivity provided her with an opportunity to firmly defend her faith, she told ACN. “They asked me to repeat bits of Muslim prayers, to wear Islamic-style garments, but I always let it be known that I was born in the Catholic faith, that I grew up in that religion, and that for nothing in the world would I change that, even if it cost me my life,” which came close to happening several times.

“More than words, however, we have to defend the faith with the witness of life. We are called to be a witness of our faith.” In this respect, she remembers that recently a Malian priest told her that thanks to her example the faith of his community has increased and become stronger.

While the affection of many was put on hold for four years and eight months, now Sister Gloria receives affection wherever she goes, a token of God’s tenderness through people. She can walk the hallways of the convent in Colombia where she trained to be a religious, and she can feel that the love she receives from people is fundamental in the gradual recovery of her inner peace. With the forceful witness of her faith, she makes an appeal, “to be constant, to continue praying, not to get tired.”

Lastly, this nun with a serene voice and a calm look does not hesitate for a moment to say that she would return as soon as possible to the mission, “to Africa or to anywhere God wants”. Because she believes that they are called to meet all the needs of the brothers and sisters who suffer the most, and “turn their communities into a little piece of heaven”, as their foundress, the Blessed Caridad, insisted they do.

Copyright: ACN Aid to the Church in Need International

ACN – Aid to the Church in Need gGmbH, HRB 8446 is non-profit organization officially registered in Germany and audited internationally by KPMG.

Any cookies that may not be particularly necessary for the website to function and is used specifically to collect user personal data via analytics, ads, other embedded contents are termed as non-necessary cookies. It is mandatory to procure user consent prior to running these cookies on your website.

Analytical cookies are used to understand how visitors interact with the website. These cookies help provide information on metrics the number of visitors, bounce rate, traffic source, etc.

Advertisement cookies are used to provide visitors with relevant ads and marketing campaigns. These cookies track visitors across websites and collect information to provide customized ads.

Performance cookies are used to understand and analyze the key performance indexes of the website which helps in delivering a better user experience for the visitors.

Undefined cookies are those that are being analyzed and have not been classified into a category as yet.